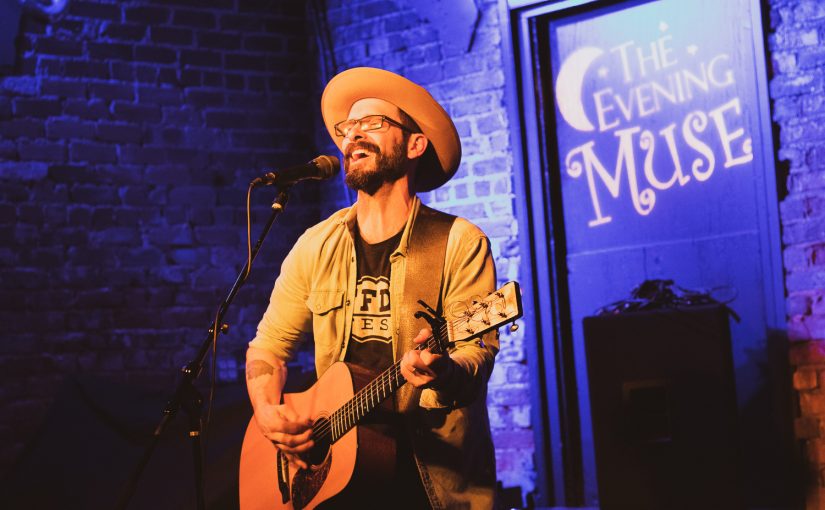 The renaissance man residing in Nashville brings his stories to Charlotte.

Tony Lucca is indeed a man of many disciplines. From his start in acting, to finding success in songwriting, with songs being placed in major tv shows including Friday Night Lights, he has had a unique career as an entertainer so far.

This was my first time seeing Tony live, so I was unaware of the energy he brings to his live shows, and it truly was infectious. The intimate setting of The Evening Muse brought Tony’s energy that much closer to the audience, providing a truly entertaining show. Tony has a way of inviting you into his songs, making you feel like you’ve heard them a thousand times. People can tell that the songs he writes mean something. They weigh on you and make you really believe true music. Different songs tell different times in his life such as “Empty Handed Blues”, born out of a long trip from Charlotte to Jacksonville. Tony’s songs are place marks in his life, a trait that many legendary songwriters have.

Apart from writing songs, Tony has ventured into organizing a music festival from scratch starting TFDI Fest(Totally Fuckin’ Doing It) with Jay Nash. “Hand selecting” different artists to perform, this festival will run in the fall(September 6th & 7th)

Other big news coming out of the workings of Tony include a new album called “Ain’t No Storm” releasing on March 29th. Super exciting news for sure!

Writing hit songs, releasing a new album, and starting a music festival sounds like a pipe dream for most musicians, but for Tony Lucca, he’s Totally Fuckin’ Doing It.