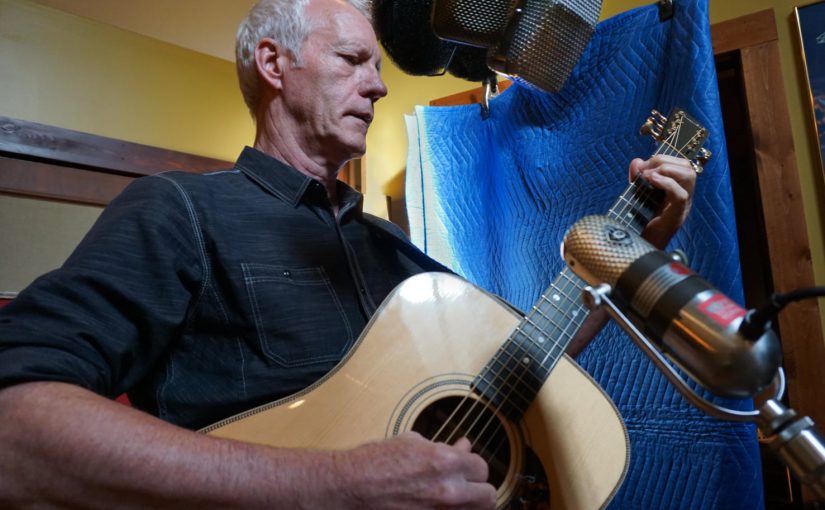 A chat with North Carolina native Rod Abernethy on his newest album “Normal Isn’t Normal Anymore” & a few stories along the way.

Around The Country had the unique opportunity to have a chat with Raliegh-based composer and musician Rob Abernethy. Talks of early beginnings, hotel room dessert & steampunk robots ensued.

A Diet of Dylan and Disney

An early fan of compositions found in Disney media, Rod attributed Fantasia and Mickey Mouse for laying the groundwork of what would be a successful composing career. Rod recalled early in his childhood

Rod also credited Bob Dylan and watching the Beatles on the Ed Sullivan show as inspiration growing up. One of Dylan’s songs(“Oxford Town”) shows up as the last song on the album.

Among songwriting lies another creative pursuit that Rod enjoys. Rod builds custom steampunk robots out of parts. Included in his wildly successful Kickstarter campaign was a chance to own one of them. When asked about how or if those robots influenced his songwriting process or the overall creation of “Normal Isn’t Normal Anymore” Rod offered an insightful view of how he usually manages multiple creative interests:

It’s all coming from the same muse, from the same place. But I don’t really see the steampunk art influencing my music at all. It’s almost like you’re driving the same car but you’re on a different highway.

What I got from Rod is that he’s always on creatively, something that is an incredible gift to have.

There’s Stories In These Songs

This album is filled with stories and inspiration drawing from all different places and talking with Rod confirmed that. Let’s dive into the behind-the-scenes of the album’s creation. Normal Isn’t Normal Anymore was recorded at Skinny Elephant Recording in Nashville TN. Rod recruited Grammy-nominated(Rifles & Rosemary Beads) producer Neilson Hubbard & had Dylan Alldredge assisting with engineering. Neilson also contributed to the drums on this album! Other than Neilson, Rod called on these other great Nashville musicians to lay the foundation for his songs:

While recording the album, Rod came back to the point that Neilson as a producer really pushed him to let go of the perfection that he was chasing.

“I will say Neilson was really good at not letting me go back and try to fix stuff or do it again. For example I would say Neilson I could play that part better..to his reply: no we’ve got it”.

From a listener’s perspective, it seems that Neilson was on the money about all of those decisions. The album sounds really solid and alive, really supporting the stories in the songs rather than taking away from them. A song with a cool story that I had the pleasure of learning about was the sixth track on the album “When Tobacco Was King”.

“When Tobacco Was King” was spurred out of this photo Rod had taken while walking through the streets of Winston Salem. The song was co-written with Susan Cattaneo, a friend, and collaborator. Susan had seen the Rods post on Instagram, and that turned into an all-day writing session. When it came to laying down the parts for the song, Rod mentioned:

“with When Tobacco Was King, we wanted to keep it kind of an intimate feeling. Guitarist Will Kimbrough came in and a lot of those parts are one-take parts.”

I thought that spoke volumes about how the record was produced and arranged. I firmly believe that the instrumentation of an album is just as important as the imagery and stories it tells. One can live without another, but when they both are present is when albums become memorable.

The third song on the album “Whiskey and Pie” also had a unique backstory as I would find out. Rod had written an instrumental on a 12 string and needed a title for the composition. While attending a Folk Alliance International conference at a hotel, Rod had stumbled upon a room in the hotel that was being used to host different folk artists. It was late at night, but the host was more than accommodating with a late-night snack for the musicians…Pie, and Whiskey to wash it down. Rod had his title.

The album as a whole is a really great listen. With Rod providing great stories, and the band providing great musicianship, it’s definitely an album that carries a lot of thought and effort. I thoroughly enjoyed the pacing and song choice of this album, as I felt every song had something unique to say. With Rod, I felt that “normal” was never the plan. An accomplished composer, maker of robots & an NC folk hero, Rod is anything but normal…and that’s an incredible place to be.

Check out Rod’s website for the latest details on show dates & news!

*Special thanks to Rod for chatting with me & providing all of the great photos!