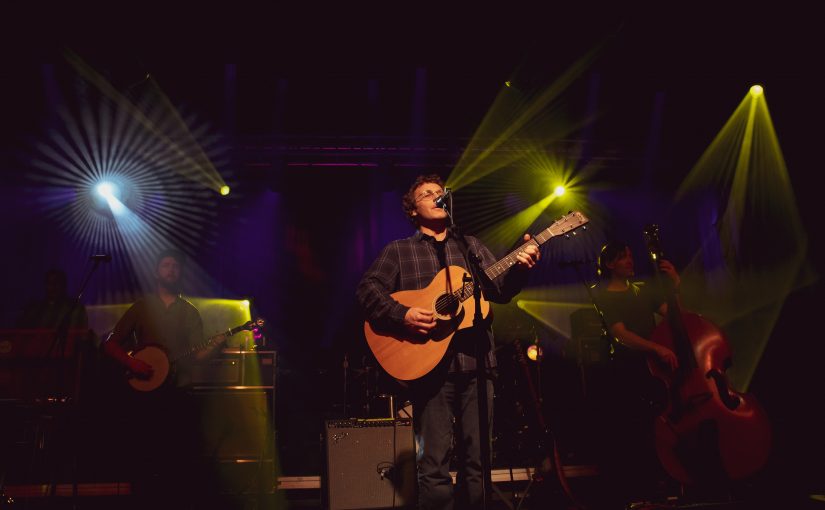 An eclectic night of bluegrass-inspired music at the Fillmore Charlotte.

February 20th, 2020. A day that brought not only eccentric weather but an eclectic band to Charlotte. Outside the roads around the Queen City were icy, the air frigid, and the temperature freezing. However, inside the Fillmore the crowd was warm and receptive to any band that happened to be on stage. Starting off the show was a duo called Handmade Moments.

Comprised of Anna Moss & Joel Ludford, this duo brought a great opening set to the Fillmore. Through brass and wood, these two brought a unique sound to the opening part of the show, and I highly recommend checking them out! They are out supporting Railroad Earth on this tour on select dates through the rest of the tour.

A plethora of instruments lined the stage. Such instruments included the usual suspects like acoustic and bass guitars. Others like pedal steel made a welcome appearance in the eyes of the attendees. Starting with a black stage, Railroad Earth was received fondly as the drummer(Carey Harmon) started the set. Slowly, building in layers, the other instruments came in building an overall sound that could only be described as cohesive.

Cohesiveness was the main underlining factor in this set. 19 years of performing will do that to a group. One thing that stuck out was how during the set, no one ever got in each other’s way. Carey Harmon’s drum fills never competed with Andrew Altman’s stand up bass lines. Tim Carbone’s violin never interfered with John Skehan’s mandolin picking. The crowd picked up on that, noting by how attentive the crowd was during the entirety of the set.

A time and a place.

Although cohesiveness was the main theme of the set, a big part of how I perceived a Railroad Earth live set was through the individual skills of every member in the band. There was a time and a place for each member to take a solo, while still contributing to the overall sound of the song.

As examples, John Skehan & Tim Carbone had many moments throughout the show where the individuality of each of their respective instruments was put on display. Even frontman Todd Sheaffer had many tasteful solos.

A great night filled with incredible music, Railroad Earth had such a fantastic set which you can check out here:

Set 1:
Chasin’ A Rainbow
Bread & Water
Bird in a House
The Hunting Song
For Love
Crossing the Gap
The Forecast
Runnin’ Wild

Set 2:
Storms
Just So You Know
420
Lovin’ You
Old Man and the Land
Warhead Boogie
Captain Nowhere
Jupiter and the 119
Cuckoo’s Medley

Be sure to check out Railroad Earth on tour through March! Dates below!